Fighting words. Trump escalated his war of words with North Korea on Thursday by doubling down on his provocative threat to rain down “fire and fury.” 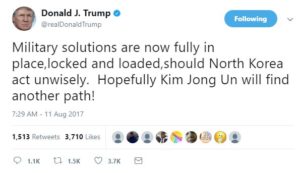 Rejecting critics who condemned his earlier warning as reckless saber-rattling, Trump said he was ready to take on the country and its leader, Kim Jong-un: “They’ve been doing this to our country for a long time, for many years, and it’s about time that somebody stuck up for the people of this country and for the people of other countries…. If he does something in Guam, it will be an event the likes of which nobody has seen before, what will happen in North Korea.”

Meanwhile, war planners are playing out war games and plotting various war scenarios as the rhetoric with North Korea continues. A nuclear-tipped missile could reach San Francisco in half an hour. An attack on Seoul, South Korea’s capital, could start and finish in three minutes. The nuclear launch approval process allows the president to use nuclear weapons with a single verbal order.

Thinking About the Unthinkable This is NUKEMAP, a nuclear effect simulator.

The inner gray circle in the diagram above shows the “air blast radius,” where most buildings collapse and “injuries are universal, fatalities are widespread.” The outermost ring shows the area where people will experience third-degree burns. “Third-degree burns extend throughout the layers of skin and are often painless because they destroy the pain nerves.”

The outermost ring shows the area where people will experience third-degree burns. “Third-degree burns extend throughout the layers of skin and are often painless because they destroy the pain nerves.”

NUKEMAP was created by Alex Wellerstein and is maintained by the College of Arts and Letters, Stevens Institute of Technology, in Hoboken, N.J., just beyond the outermost ring.

Opioid epidemic. Trump said he plans to declare our nation’s opioid crisis a national emergency which would let cities and states receive federal disaster funds and other aid. Six states—Alaska, Arizona, Florida, Maryland, Massachusetts and Virginia—have already declared emergencies. About 33,000 of the 52,000 overdose deaths nationwide in 2015 were from opioids like heroin and fentanyl. Tom Price, the secretary of health and human services, has said the crisis can be addressed without declaring an emergency.

Going dark. The IMAX cinema at the Smithsonian’s Natural History Museum, the only place in Washington, D.C., where people can see natural history films on the giant screen, is expected to close this fall to expand the exhibition area and a cafeteria. The theater has a six-story screen. “How can it be within the Smithsonian’s mission to provide our children with less nature and more fast food?” asked filmmaker Jonathan Barker. He and other filmmakers started a petition to try to save the IMAX.