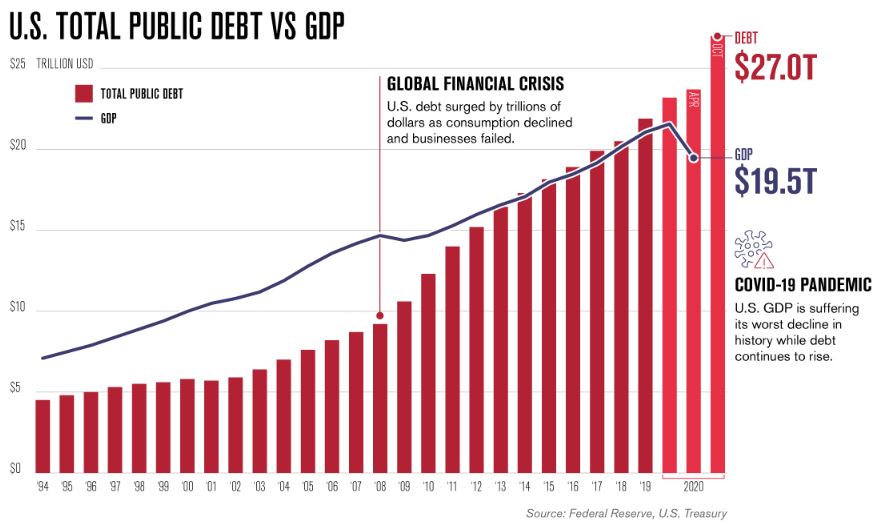 How Will Our Children Know They Face a Crushing Debt Burden?

The question in the headline above may seem silly.

Of course, they will know because there are a number of policy shops that will be spewing out endless papers and columns telling them that they are facing a crushing debt burden.

Because these policy shops are well-funded and well-connected we can be sure that major media outlets, like The New York Times, The Washington Post and National Public Radio, will give their complaints plenty of space.

But let’s imagine a world where our children weren’t constantly being told that they face a crushing debt burden. How would they know?

Even with a higher tax burden due to the debt we are now building up, workers 10 years out should enjoy substantially higher living standards than they do today.

It might be hard if the latest budget projects are close to the mark. The Congressional Budget Office (CBO) just released new projections for the budget and the economy.

They show that in 2031, the last year in their budget horizon, the interest burden on our debt will be 2.4% of Gross Domestic Product. That’s up from current interest costs of 1.4% of GDP. That implies an increase in the debt burden, measured by interest costs, of 1.0 percentage point of GDP.

Side note 1: The true debt burden is actually somewhat less. Last year the Federal Reserve Board refunded $88 billion, roughly 0.4% of GDP, to the Treasury. This was based on interest that it had collected on the bonds it held. That leaves the actual interest burden at around 1% of GDP.

Will an interest burden of 2.4% of GDP crush our children?

On the face of it, the deficit hawks have a hard case here. The interest burden was over 3% of GDP for most of the early and mid-1990s. And for those who were not around or have forgotten, the 1990s, or at least the second half, was a very prosperous decade. It’s a bit hard to see how an interest burden of 2.4% of GDP can be crushing if burdens of more than 3% of GDP were not a big problem.

But, the debt burden may be higher than the current projections show. After all, President Joe Biden has proposed a $1.9 trillion pandemic rescue package. He also will have other spending initiatives. The CBO baseline includes tax increases in current law that may not actually go into effect.

Let’s assume that the rescue package and other issues raise the debt for that year by 10%, or $3.5 trillion. This brings the interest burden to 2.7% of GDP. That’s still below the 1990s level.

Furthermore, insofar as the rescue package and other initiatives are successful in boosting growth, GDP, the denominator in this calculation, will be larger, which will at least partially offset the higher interest burden.

One point the deficit hawks add to this calculation is that interest rates are extraordinarily low at present.

Higher rates will mean that the debt poses a greater interest burden. But there are a couple of important qualifications that need to be made. First, much of our debt is long-term. The 30-year bond issued in 2021 at a 2% interest rate doesn’t have to be refinanced until 2051. That means that even if interest rates do rise substantially they will only gradually lead to a substantially higher interest burden.

The other point is that we have to ask about the reason interest rates are rising.

It is possible that interest rates will be rising even as the inflation rate remains more or less in line with CBO’s latest projection of around 2%. In that case, higher interest rates mean a greater burden over time.

In the case where higher inflation is the reason for higher interest rates, the actual burden of the debt does not change.

With nominal GDP growing more rapidly due to the higher inflation, the ratio of debt to GDP would be lower than in the case with lower inflation. This means that we only need to worry about a higher interest burden if interest rates rise without a corresponding increase in the rate of inflation.

What would adding a 1 percentage point interest burden look like?

Suppose that the CBO projections prove to be exactly right.

At first glance, this higher interest burden implies that, if the economy is operating near its capacity, we would have to get by having the government spend roughly 1 percentage point less of GDP on various programs. This could mean, for example, cuts to spending on education and infrastructure, or the military. Alternatively, it would need to raise taxes by roughly 1 percentage point of GDP, or some combination to offset the additional interest payments on the debt.

In fact, the first glance story is likely to substantially overstate the impact of this debt burden. The reason we would need to cut spending and/or raise taxes is to keep the economy from overheating.

The interest burden increases this risk by increasing the income of bondholders, who then spend more money because of their higher income.

But the bondholders don’t spend all of the interest income they receive, in fact, they might spend a relatively small share.

Remember, the people who hold government bonds are disproportionately higher-income households. That’s why it is possible to say there is a burden from interest payments. If the interest was paid out to all of us equally, then we would just be paying ourselves. As was the case with the pandemic checks, and there would be no burden.

With a large share of interest payments going to the wealthiest households perhaps 70 cents on a dollar ends up being spent. This is what we have to offset with spending cuts or higher taxes. That means we need to come up with a combination of spending cuts and tax increases that will reduce demand in the economy by 0.7% of GDP.

If we did this on the spending side, we would need to cut an amount of spending roughly equal to this amount. In the current economy, 0.7% of GDP would come to around $150 billion in spending cuts, roughly a fifth of the military budget or twice the annual budget for food stamps.

On the tax side, we might be tempted to take it from the wealthy, but we then come back to the same issue, that the wealthy save much of their income. If we want to reduce the consumption of the wealthy by an amount equal to 0.7%, we may have to raise taxes on them by something close to twice this amount, or 1.4% of GDP.

Suppose this proves politically impossible, so we end up having to share the higher tax burden more or less evenly across households. This means a tax increase equal to roughly 0.7% of people’s incomes. Is this a big deal?

Wages and Productivity Get Divorced

The figure above shows the impact of CBO’s projected increase in productivity over the next decade on wages, assuming productivity growth is fully passed on in higher wages.

It also shows the 0.7 % hit from debt burden taxes. As can be seen, the projected wage gains from higher productivity growth are roughly 20 times the “crushing” burden of the debt calculated above.

This means that even with a higher tax burden due to the debt we are now building up, workers 10 years out should enjoy substantially higher living standards than they do today.

There is the obvious issue that productivity growth does not automatically translate into higher wage growth.

This pattern of upward redistribution of before-tax income could continue for the next decade, which would mean that most workers cannot offset an increased tax burden with higher pay. That would be a very serious problem, but the problem would be the upward redistribution blocking wage growth, not the relatively minor tax increase they might see due to the debt.

Anyone generally concerned about the well-being of workers 10 years out, or further in the future, should be focused on what is happening to before-tax income, not the relatively modest burden that taxes may pose due to the debt.

This brings up a final issue about burdens. As I have often pointed out, direct spending is only one way the government pays for services. It also grants patent and copyright monopolies to provide incentives for innovation and creative work.

At the end of the day, we hand down a whole economy and society to future generations. Anyone seriously asking about the well-being of future generations must look at the education and training we have given our children, the physical and social infrastructure and, of course, the state of the natural environment.

The government debt is such a trivial part of this story that is hard to believe that would even be raised in the context of generational equity, if not for the big money folks who want to keep it front and center.