Trump administration plans to allow energy companies to survey for oil and gas off the Atlantic coast threaten North Atlantic right whales. There are only about 500 of the endangered giants, which were hunted nearly to extinction up to the 1950s.

The whales are harmed when surveyors fire airguns to create seismic images of what’s under the ocean floor.  One marine scientist compared the barrage to “dynamite going off in your living room or in your backyard every ten seconds for days to weeks at a time.”

Former President Barack Obama’s administration rejected permits in January from six companies that wanted to survey the Atlantic coast for oil and gas deposits. That decision was based, in part, on harm the surveys would do to right whales, sea turtles and other marine life. Government estimates said up to 138,000 marine animals could be injured.

Trump reversed that in an executive order in April, saying that “safe and responsible development of our offshore natural resources is critical to the nation’s environment and economy.” 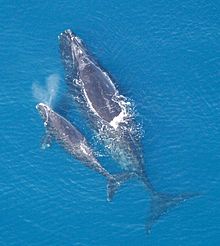 The Wildlife Conservation Society opposes seismic testing. The society can be reached at 718-220-5100.

Opening up the Atlantic and Arctic to oil drilling, as Trump wants to do, could benefit companies such as Cobalt International Energy which paid $370,000 on federal lobbying in 2016. Attorney David Bernhardt, Trump’s nominee for the No. 2 job at the Interior Department, is a shareholder at the Denver law firm, Brownstein Hyatt, that Cobalt paid to lobby and has also lobbied for Cobalt.

Cobalt was also the subject of a federal bribery probe, but the company announced in February that the investigation had ended.

More than 120 cities and towns on the East Coast oppose offshore drilling and/or seismic surveys. Tourism and recreation, not oil, employed 309,633 people in 2014 in the southeast Atlantic area.

“Seismic testing is not only dangerous on its own, but it will lead to offshore drilling that could threaten our coasts even more,” said Jeff Tittel, director of the New Jersey Sierra Club.

In 2010, the Deepwater Horizon oil spill befouled the coastlines of Louisiana, Mississippi and Alabama after an estimated 4.9 million barrels of oil were released in the accident.

The last energy exploration of the offshore Atlantic was in 1988. Government estimates say that 1.3 billion to 5.58 billion barrels of oil and gas remain to be discovered beneath the U.S. Atlantic outer continental shelf.

Environmentalists point to studies that show seismic surveys, much less than the drilling that can follow, causes harm. Humpback whales sing less. Sea turtles swim in erratic patterns. Right whales may have trouble communicating with each other.

“The stress of widespread seismic airgun surveys may even represent a tipping point for the survival of the endangered North Atlantic right whale,” said Howard Rosenbaum of the Wildlife Conservation Society.