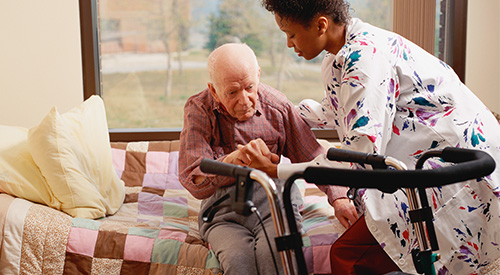 Medicaid budget cuts. Trump’s first major budget proposal on Tuesday will include massive cuts to Medicaid and call for changes to anti-poverty programs that would give states new power to limit a range of benefits, The Washington Post reported. Trump’s budget plan follows through on a bill passed by House Republicans to cut Medicaid more than $800 billion over 10 years, which the Congressional Budget Office estimates will cut off health-care benefits for about 10 million people. Medicaid is the largest single source of money for long-term care for the elderly. Trump also will call for giving states more flexibility to impose work requirements for people in different kinds of anti-poverty programs, including the Supplemental Nutrition Assistance Program (SNAP), the modern version of food stamps. Separately, Trump has called for an end to subsidies paid under the Affordable Care Act (Obamacare), which he and Republicans want to repeal.

Fueling Sunni-Shiite rage. As Trump spoke to Sunni Muslim leaders, voters in Shiite Muslim Iran re-elected moderate Hassan Rouhani to a second term. But Trump called Sunday for Iran to be isolated, suggesting that engagement with Iran does not encourage change there. He called for Muslim leaders to step up their efforts to counter a “wicked ideology” and purge the “foot soldiers of evil” from their societies. Trump plans to sell $110 billion in arms to Saudi Arabia. Trump is flying to Israel today where he will also visit the Palestinian territories.

No to Pence. About 150 people, half students and the other half family members, walked out of the University of Notre Dame graduation Sunday after Vice President Mike Pence took the stage. One student stood near the front with her back turned during Pence’s speech. Valedictorian Caleb Joshua Pine, who spoke before Pence, said, “our generation must stand against the scapegoating of Muslims.”

Interior conflicts. The confirmation hearing for Trump’s nominee for the No. 2 position at the Interior Department, David Bernhardt, is scheduled for Thursday. Bernhardt’s potential conflicts of interest include lobbying for Cobalt International Energy which holds oil drilling leases in the Gulf of Mexico and lobbying for a proposed copper mine in Arizona that would be the third-largest copper mine in the country. Bernhardt would help direct the management of national parks and monuments and endangered species. In the wake of the growing controversies over Trump’s connections with Russia, BBC Extra’s premier interviewer Owen Bennett Jones devotes an hour to a close look at what the allegations really amount to.

DCReport.Org’s own James S. Henry leads off with an analysis of how both Trump and Vladimir Putin managed to stage comebacks in the early 2000s, with a great boost from Russian/FSF capital flight, kleptocracy, and transnational criminal networks. The BBC’s Paul Wood, Gabriel Gatehouse and Steve Rosenberg contribute up-to-the-minute reporting from Moscow and Washington.

Henry is our senior editor for investigative economics and wrote our expose of connections between Russian oligarchs and Wilbur Ross, Trump’s Commerce Secretary.