Trump’s Tweets Suggest that He Has Destroyed Evidence

There’s Something Odd About His Denial that He Taped Comey

Trump’s odd tweets on Thursday denying that he taped his private conversations with ex-FBI Director James Comey have, largely, been accepted by the public and the press on their face.

There have been some raised eyebrows suggesting that if Trump didn’t tape, someone else might have. But the consensus seems to be that 1) Trump didn’t tape Comey and 2) that Trump suggested that he might have taped Comey in order to influence the director’s Congressional testimony.

Trump said as much in a friendly Fox News interview timed right after the tweets were posted, apparently willing to brush up against the possibility of witness-tampering charges rather than to acknowledge the existence of more damaging obstruction-of-justice evidence.

Still, there’s something quite unusual in those two tell-tale tweets, and the largely uncritical acceptance of his oddly phrased denial should be setting off BS alarms in the offices of Robert Mueller’s investigators and newsrooms.

As the saying goes, it would be irresponsible not to speculate, and I speculate that 1) Trump’s White House office was wired, 2) he had the tapes of his Comey conversations destroyed and 3) when Trump’s attorneys learned of this, they dictated his Twitter denials.

Trump has a well-documented history of lying, even acknowledged by the supportive right-wing press. He has destroyed evidence in the past. And he has long recorded conversations in his private offices and properties. Why, then, should anyone believe this claim?

Take a close look at the two tweets (text continues below): 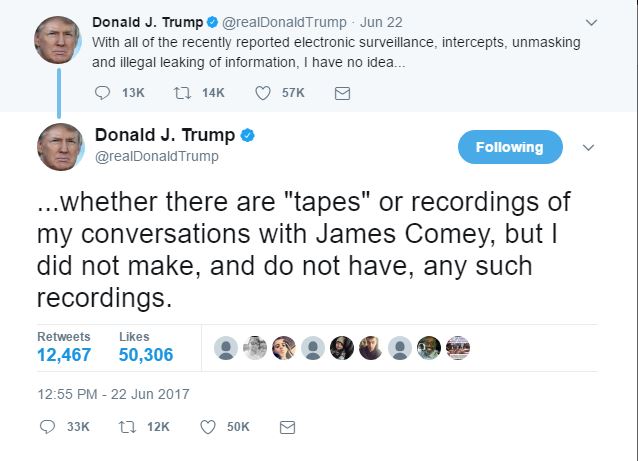 They don’t even sound like Trump. There’s no emotion. No idiosyncratic constructs. No name calling. No adjectives or characterizations at all. They read like they were dictated by a lawyer.

The opening dependent clause is too inclusive and precise (electronic surveillance, intercepts, unmasking…), and not Trumpian at all.  He doesn’t type that way. I dare say you will not find a clause constructed like that anywhere else in Trump’s Twitter history.

The language and punctuation of the actual denial are legalistic ( “ … but I did not make, and do not have, any such recordings.”) and, again, far too precise.

Finally, look at what comes before and after. Shortly before the denial tweets, Trump wrote: “I certainly hope the Democrats do not force Nancy P out. That would be very bad for the Republican Party – and please let Cryin’ Chuck stay!” That is much more typically Trump.

He followed the denials tweets with a Breitbart News item on immigration busts and, right after that, another tweet that ends: ‘BUILD THAT WALL!”  Again, typed in just the way you’d expect him to type.

Yes, these denial tweets are highly suspect, and, I believe, indicate that Trump has destroyed recordings of his conversations with Comey.