How Trumpcare Is Becoming ‘Sanderscare’ 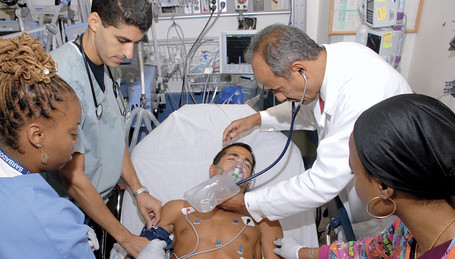 Misguided Republicans Are Moving Us Closer to Single-Payer Healthcare

Healthcare blowback. Don’t tell Trump, but Republican efforts to kill the Affordable Care Act are turning it into what progressives like Sen. Bernie Sanders (I-Vt.) say they have always wanted and more like what conservatives despise—government-run healthcare. By ending the tax penalty for people who do not have coverage, beginning in 2019, Republicans may hasten the flight of customers who now pay the full cost of their insurance toward government-subsidized care.

Those left behind under the umbrella of Obamacare are people of modest means who qualify for Medicaid or receive sizable subsidies for private insurance. In total, more than one-third of the population is covered with federal assistance, through Medicare, Medicaid, the Department of Veterans Affairs, the military and Affordable Care Act subsidies.

Among people ages 18 to 64, the proportion with public insurance coverage has increased to more than 19%, from 11.5% in 2005, and the share of people in that age range who are uninsured has fallen to 12.5%, from about 19%, according to the National Center for Health Statistics.

Midwest smog. The attorneys general in eight states along the Eastern Seaboard are suing the Environmental Protection Agency over air pollution that blows in from upwind states, mostly from the Midwest. New York, Connecticut, Delaware, Maryland, Massachusetts, Pennsylvania, Rhode Island and Vermont are the plaintiffs. The lawsuit is over EPA’s denial of a petition that some of those states had filed in 2013 under the Clean Air Act to get the agency to add nine states to a group that must work together to reduce smog.

Koch cash. The political network backed by the Koch brothers plans to spend millions in 2018 to try to convince people in our country that the tax overhaul that benefits the ultra-rich really isn’t shafting most of us. The network says the campaign will try to demonstrate to Americans that the law is pro-growth and will improve our lives. Seminars, workshops, town-hall-style events, phone banking and door knocking are planned.

Pebble mine. Backers of a proposed copper and gold mine near a major salmon fishery in Alaska are submitting a permit application for the Pebble Mine with the U.S. Army Corps of Engineers. The Bristol Bay region produces about half the world’s sockeye salmon. Northern Dynasty Minerals Ltd. of Canada owns the Pebble partnership. Another Canadian company, First Quantum Minerals Ltd., may invest $37.5 million toward the permitting costs. Former President Barack Obama’s EPA had used the Clean Water Act to block the mine, but Trump’s EPA undid that. The Obama EPA said the mine will result in a “complete loss of fish habitat” in the region.