Home » Featured Story » The Tyrant in the White House

The Tyrant in the White House

By Siccing the Justice Department on Andrew McCabe, Trump Takes Our Government to a New Depth of Depravity

To me, it feels ice-tinglingly creepy that the U.S. Attorney Jessie Liu in Washington wants to bring criminal charges against former Deputy FBI Director Andrew McCabe.

The charge, basically that McCabe lied about a leak to a reporter, seems to come nowhere near close to supporting a criminal charge after 18 months of investigation, an expired grand jury and public humiliation for McCabe in firing him two days short of his professional resignation, killing off his pension. It seems that even a grand jury has decided not to react to the prosecution’s call for indictment.

But that’s not what’s wrong here. It is the White House squeezing the Justice Department to do its political bidding.

This case is raw partisan political retribution by Donald Trump for the FBI to have launched the formal all-things-Russia investigation against Trump’s campaign.

Make no mistake about this: This case is raw partisan political retribution by Donald Trump for a subordinate at the FBI to have launched the formal all-things-Russia investigation against Trump’s campaign and cooperation with Russia to alter the 2016 election and to obstruct any probe by firing former FBI head James B. Comey Jr.

This is the stuff of tyrants and despots, not a democracy.

Worse, we’re seeing the same in other cases, including this week’s call for the Justice Department to come to the defense of Supreme Court Justice Brett Kavanaugh to new information about indecent partying years ago at Yale. Or in calling on Justice to keep former staffers to obey congressional subpoenas using a made-up version of immunity. 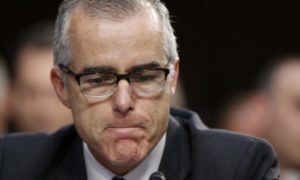 It is not clear where things actually stand with the McCabe case. The U.S. attorney recalled the expired grand jury, which met for a day. There are only a limited number of purposes to be served: The grand jury could be asking for more information, unlikely after 18 months of investigation into a case in which most of the naughty information was agreed to upfront. Or the grand jury was there to indict. Or, the grand jury refused to issue the indictment, believing it to be too political.

Here’s the legal stuff: McCabe’s legal team was notified that the Justice Department authorized prosecutors to seek an indictment against him for lying to investigators, the result of a failed appeal in the matter to Deputy Attorney General Jeffrey Rosen. U.S. Attorney Jessie K. Liu had said he would seek an indictment. By yesterday, nothing more was heard other than the recall of the grand jury.

The non-legal background: McCabe was less than “candid” with Justice investigators after a leak to The Wall Street Journal about the handling of Hillary Clinton email information in response to a story that McCabe thought factually incorrect. Therein, the crime – lying to investigators.

Of course, it was McCabe who was left at the head of the FBI to review the disparate parts of the investigations into Trump’s campaign and contacts with Russians hoping to interfere with the election. From Special Counsel Robert S. Mueller III to every official review of the matters that had preceded it, people from almost all sides of the political world had concluded that even if they would not have opened a full investigation against Trump, doing so was within a band of reasonableness.

McCabe lost his job, and his pension, and he and his wife, a one-time candidate for local office in Virginia, have been drubbed for years now by Trump tweets and statements. The prevalence of those Trump public attacks has been so much, including public calls of “treason,” that they could weaken any case against McCabe as abuse of power.

My feelings about the case have little to do with McCabe himself, of course. Rather I am gobsmacked again by the idea that we have a guy in the White House who so believes he is the State, that his word is enough to send perceived political enemies to jail on a whim.

Yet, the only thing that matters is striking out against perceived enemies. McCabe and Comey hit him, says the Trump mind, so he hits them. Hard. Criminally.