The Kurds Will Never Again Help the U.S. in the Middle East 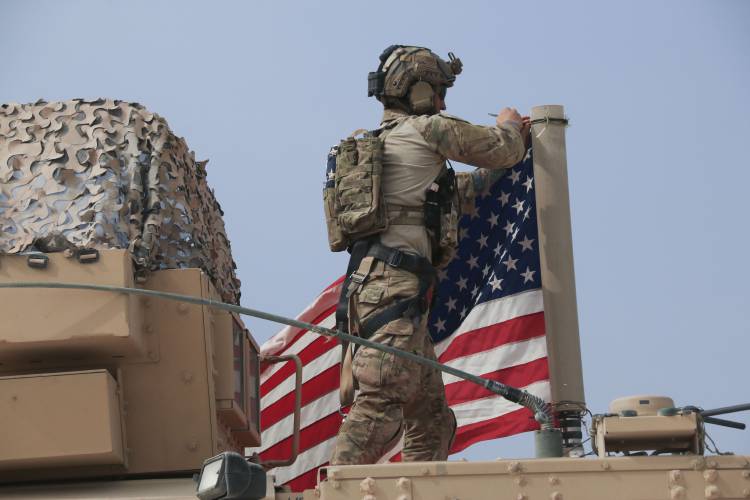 American soldier mount the U.S. flag on a vehicle near the town of Tel Tamr, north Syria, Sunday, Oct. 20, 2019. Kurdish-led fighters and Turkish-backed forces clashed sporadically Sunday in northeastern Syria amid efforts to work out a Kurdish evacuation from a besieged border town, the first pull-back under the terms of a U.S.-brokered cease-fire. (AP Photo/Baderkhan Ahmad)
Share
Facebook Twitter LinkedIn Pinterest Email WhatsApp

A Veteran CIA Officer’s Take on the Syria Pullout

This week, as hundreds of ISIS fighters escaped from Kurdish prisons in northeastern Syria following Donald Trump’s decision to pull out American troops, a group of current and former “special operators” for U.S. intelligence met for a previously scheduled casual lunch in Washington.

Their take on Trump’s abandonment of the Kurds—a move that enabled Turkey to invade the region, for Russians to move into former U.S. positions and for extremists to maybe start plotting attacks on Europe again?

Everyone is heartbroken. We’ve lost face in front of the world and we’ve lost everyone’s trust.

“Everyone is heartbroken,” said one former CIA agent at the lunch who worked conflicts all over Europe, Africa and the Middle East during a long career. “We’ve lost face in front of the world and we’ve lost everyone’s trust.”

The lunch took place one day before a Kurdish female politician, Hevrin Khalaf, 35, was brutally pulled from her car and shot dead along with eight other people by pro-Turkish forces, many of whom are recycled Syrian rebel soldiers with the same extremist sentiments as ISIS. The Turkish proxies are also reportedly deliberately releasing ISIS prisoners while they maraud and pillage through Syria.

It was bad enough, said the CIA agent, that Trump totally lied last year when he said ISIS had been “100 percent” defeated. For months now, everyone from Pentagon officials to Sen. Lindsey Graham [R-S.C.] to witnesses on the ground in Syria have insisted ISIS is still very much active in the Middle East. One Parisian-based terror expert told DCReport he was in Syria in July and had proof of more than 100 ISIS attacks that month alone.

“But the worst part for us is that we’ve completely lost our credibility,” said the operative, who once fought alongside the Peshmerga, the Kurdish fighters, in Kurdistan in Iraq, among many others.

“We’ll never get that trust back again when we go in for any kind of special ops or covert operations. We used to have respect as Americans. Now if we come in with our SUVs and our money and our tech and say we want to help you fight, they’re not going to want any part of us. They’re gonna think we’ll betray them.”

U.S. officials, most notably Brett McGurk, the former U.S. special envoy for the coalition to defeat ISIS who quit in protest of Trump’s policies late last year, have been vehemently opposed to Trump’s actions in Syria.

McGurk was furious when he heard Trump tell the faithful at his Dallas rally Oct. 17 that the Turks and the Kurds were like a couple of kids fighting.

“This is an obscene and ignorant statement,” McGurk tweeted. “200k innocent people displaced. Hundreds dead. Credible reports of war crimes. ISIS prisoners escaping. US evacuating and bombing its own positions or handing them to Russia. Two kids in a lot?”

McGurk is right, said the CIA agent, but even he doesn’t know what it will be like for U.S. soldiers and operatives on the ground from now on.

“It changes everything,” he said. “On our level, it’s warrior to warrior, that is all. In war, all that matters is who you think you can trust and who you can’t. Not being trusted can get you killed out there.”

Mark Campbell, the co-chair of the Kurdistan Solidarity Campaign in London, said he knew American soldiers still left in Syria who are “completely devastated, right up the ranks.”

“The Kurds had built up a very good relationship with military on the ground under Obama,” Campbell said. “The Kurds were the boots on the ground … They had an incredible comradeship with the Americans. Now I’ve heard that the American soldiers who are still in Syria are actually crying over this. Crying.”

Campbell was in constant touch with Kurdish fighters and civilians on the ground this week. He told DCReport Friday that unarmed civilians were trying to form “human shields” to advance through the region and bring back the dozens if not hundreds of “rotting, stinking bodies” of those killed by pro-Turkish forces since the invasion.

“There’s no military around to help them,” Campbell said. “They don’t have guns. There are numerous reports of war crimes. Kurds are being dragged out of their cars and shot and the (pro-Turkish) fighters are filming it. Just like ISIS. And remember these are the people doing the fighting for NATO. These are NATO fighting forces that are acting in the same way as ISIS fighters. It almost begs the question, was this a calculated plan to instill fear among the Kurds, just as ISIS did?”

The Turkish proxies who are coming over the border from Turkey, brandishing their guns and yelling in the same style as ISIS did in their heyday from 2015 to 2017. Brazenly filming their attacks and flooding the videos on social media is also reminiscent of ISIS, Campbell said.

Watching Trump brag Thursday that he had reached a “great” ceasefire deal with Turkish president Erdogan “a situation where everyone is happy and there is no fighting,” was painful and disgusting, Campbell said.

“What he said was a bizarre public relations stunt I guess to make him look good to his base and has literally nothing to do with the reality of what’s happening,” Campbell said. “I don’t think Trump understands one thing about the Kurdish situation. Nothing he said many any sense. And there is no ceasefire. There are Turkish airstrikes as well as attacks on the ground.”

Campbell said he considered Trump’s remarks about the Kurds quite “racist” as well.

“Characterizing them as children was so disrespectful and patronizing,” he said “We’re talking about the future of millions of people in the Middle East. The way he talks about it is disgusting.”