It Looks Like Curtains for the Donald and Boris Show 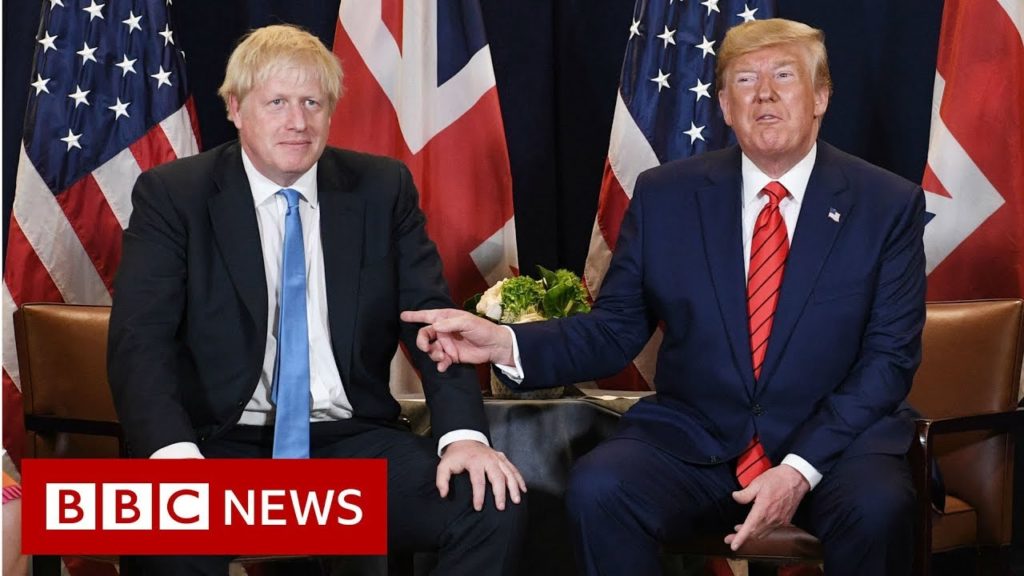 They could co-star in “Dumb and Dumber—The OK Boomer Special Edition.” But Donald Trump and Boris Johnson reached a critical point in their sometimes rocky bromance this week.

Yes, it’s true, the British prime minister sent his alleged ally across the Atlantic what every couple in a long-distance relationship dreads: Mixed messages.

At first blush, it might have seemed that Johnson was kissing Trump’s ring. He said Tuesday in a rare sit-down interview with BBC Breakfast that if the 2015 Iran nuclear deal breaks down, a “Trump deal” should replace it.

“The problem with the agreement is that from the American perspective it’s a flawed agreement, it expires, plus it was negotiated by [former] President Obama and from their point of view it has many, many faults,” Johnson said. “Well, if we’re going to get rid of it, let’s replace it and let’s replace it with the Trump deal, that’s what we need to see.”

Johnson refused to kowtow to Trump even after senior administration officials flew to London and implored Britain to implement a full 5G ban. Johnson appeared to fawn even further over Trump in the broadcast.

“I think that would be a great way forward. President Trump is a great dealmaker, by his own account and many others, let’s work together to replace the JCPOA and to get the Trump deal instead,” Johnson added.

The JCPOA, or the Joint Comprehensive Plan of Action, was originally signed by Iran and the United States, United Kingdom, Germany, France, Russia and China to prevent Iran from developing nuclear weapons. The United States abandoned the deal in 2018.

Trump says he won’t back a new deal unless it includes new controls over Iran to stop the regime funding terrorist groups, fighting proxy wars and testing ballistic missiles.

But what got shorter shrift in Johnson’s unexpected BBC interview was his defiance of Trump’s strident demands that he and the rest of Europe ban China’s powerhouse Huawei technology that’s ahead of the rest of the world in rolling out 5G.

5G, a massive cellular upgrade that will enable the storied Internet of Things and smart factories, is arguably a force likely to outlast current geopolitical emergencies. It could have a more lasting impact on the planet than the crisis du jour in the Middle East.

On this issue, Johnson refused to kowtow to Trump—at least for now. Senior Trump administration officials flew to London on Monday to present what they said were new security risks allegedly posed by Huawei. They unsuccessfully implored Britain to implement a full 5G ban.

One delegation member predicted it would be “nothing short of madness” if Britain allowed Huawei to supply high speed 5G mobile phone networks, the Guardian reported.

But Johnson wasn’t having it Tuesday.

My Way or Huawei

“The British public deserve to have access to the best possible technology. We want to put in gigabit broadband for everybody,” Johnson said. “Now if people oppose one brand or another, then they have to tell us what’s the alternative.”

Recently, the head of Britain’s MI5, Andrew Parker, said he had “no reason to think” that using Huawei technology should threaten intelligence sharing with America.

Can this political marriage be saved? Not even time may tell, as the pair are so patently unpredictable.

“As much as their politics echo each other, Britain and the U.S. will struggle to reenergize their long-standing special relationship.” So said Robin Niblett, director of Chatham House, an independent think tank in London, to The Los Angeles Times in a recent Op-ed titled “Boris Johnson & Donald Trump: Brothers in Chaos.”

“On the plus side, the two countries share deep and mutually beneficial cultural, business and security linkages, which could allow them to strengthen the transatlantic axis in the face of growing assertiveness from Russia and China. But Britain’s post-Brexit geopolitical isolation and economic uncertainty will impose limits on its role as America’s principal ally.”