The Ventilator Business Is Its Own Swamp of Miscreant Corporations 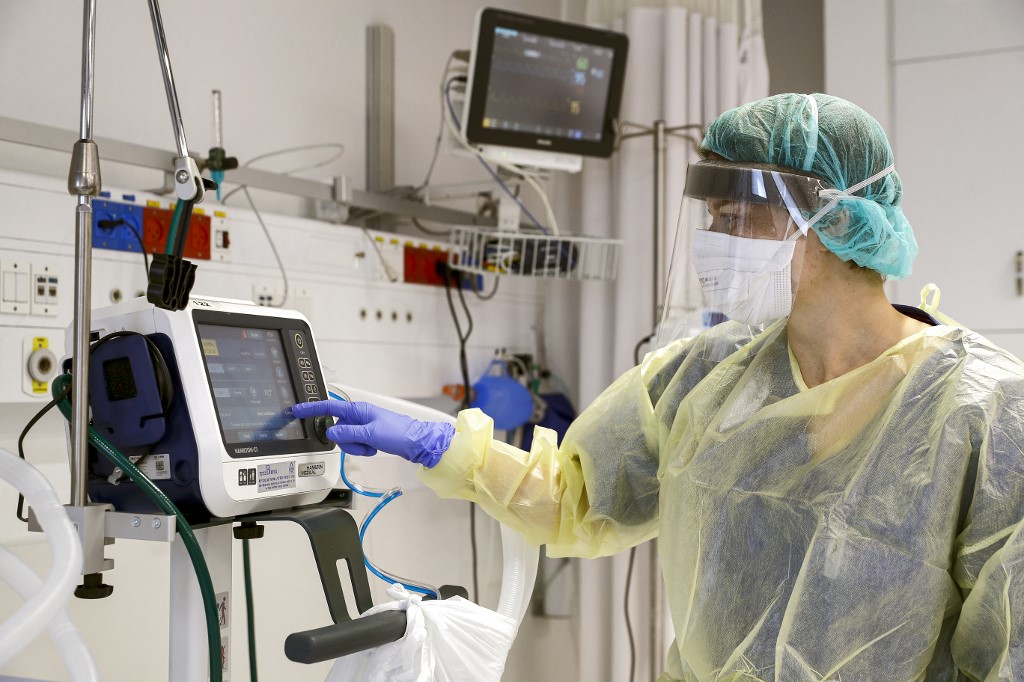 (FILES) In this file photo taken on March 16, 2020, during a press presentation of the hospitalisation service for future patients with coronavirus at Samson Assuta Ashdod University Hospital in the southern Israeli city of Ashdod, shows the director of the epidemics service Dr Karina Glick checking a medical ventilator control panel at a ward, while wearing protective clothing. - New York is days away from running out of essential equipment needed to keep hospitals running because of the coronavirus pandemic, its mayor warned March 22, 2020. The Big Apple has the highest number of confirmed cases of COVID-19 in the United States and Bill de Blasio said they city's hospitals were at breaking point. "Bluntly, we're about ten days away now from seeing widespread shortages of ventilators, surgical masks, the things necessary to keep a hospital system running," de Blasio told CNN. (Photo by JACK GUEZ / AFP)
Share
Facebook Twitter LinkedIn Pinterest Email WhatsApp

The Rap Sheets of the Big Ventilator Producers—ResMed, Philips, GE and Others

People hooked up to ventilators, or awaiting them, are relying on equipment from an industry rife with kickbacks, bribery and apparent profiteering. And the Trump administration won’t step up to ensure fair distribution.

The case did not receive much attention. But ResMed, which also produces ventilators with a similar purpose of providing the breath of life, is one of the companies involved in controversy over the distribution of equipment hospitals desperately need to save lives during the COVID-19 pandemic.

New York Gov. Andrew Cuomo and other state chief executives are complaining about price-gouging and shipments that fail to materialize. As health systems across the country compete for a woefully inadequate supply of ventilators, some machines have reportedly been exported.

All the big publicly traded companies in the industry have paid millions of dollars in penalties in False Claims Act, kickback and bribery cases.

This apparent profiteering should come as no surprise. Consider the poor track record of the ventilator industry. ResMed is not the only producer with a history of alleged misconduct. In fact, all the big publicly traded companies in the industry have paid millions of dollars in penalties in False Claims Act, kickback and bribery cases.

Along with ResMed, they are Philips, General Electric, Hill-Rom and Medtronic.

In 2016 a Philips subsidiary called Respironics agreed to pay $34.8 million to settle kickback allegations similar to those faced by ResMed. In 2013 the Securities and Exchange Commission ordered Philips to pay $4.5 million for violations of the Foreign Corrupt Practices Act stemming from improper payments to healthcare officials in Poland.

In 2011 GE Healthcare agreed to pay $30 million to settle False Claims Act allegations. A subsidiary caused Medicare to overpay for a radiopharmaceutical used in certain cardiac diagnostic imaging procedures by giving the federal government false or misleading information about doses.

Also in 2011 Hill-Rom agreed to pay $41.8 million to settle allegations that for years it knowingly submitted numerous and repeated false claims to the Medicare program for certain specialized medical equipment – bed support surfaces for treatment of pressure ulcers or bed sores – for patients for whom the equipment was not medically necessary.

Since 2006 Medtronic and its subsidiaries have paid more than $160 million in penalties in eight False Claims Act cases. The largest of these was a $75 million settlement agreed to by Medtronic Spine to resolve allegations that its marketing activities caused hospitals to submit false claims for kyphoplasty procedures, minimally invasive surgeries used to treat compression fractures of the spine caused by osteoporosis, cancer or benign lesions.

Along with the False Claims Act cases, which are civil matters, a Medtronic subsidiary agreed to plead guilty and pay more than $17 million in 2018 to resolve a criminal charge that it promoted a neurovascular device for uses that were not approved by the FDA and were potentially dangerous.

It is true that none of these cases involved mechanical ventilators, but they do suggest something about ethical practices at the five companies. These are corporations accused of putting their own financial interests ahead of those of the federal government and thus the taxpayers. One of them has a subsidiary that is literally a corporate criminal.

The coronavirus crisis is exposing many vulnerabilities of U.S. society. Among them is that the survival of many thousands of people now depends in large part on the behavior of a group of companies that have been something less than model corporate citizens.

This makes it all the more scandalous that the Trump administration refuses to make full use of the Defense Production Act to end profiteering in the ventilator industry and force it to serve the needs of the country during this national emergency.