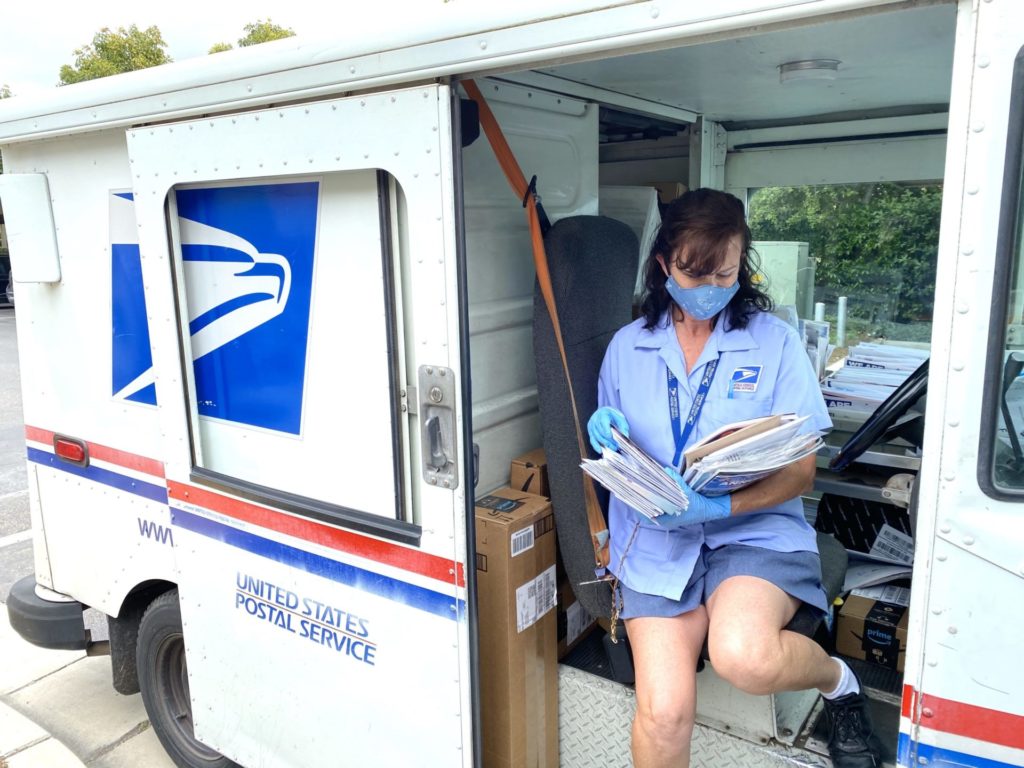 In the weeks ahead America’s daily mail delivery may come to a complete halt because the U.S. Postal Service is running out of cash. Donald Trump may intervene at the last-minute action so he can proclaim himself a hero.

But the real story here is one of Congressional neglect, Republican animosity and the craziest pension-plan-funding scheme ever devised.

The result: a manufactured disaster just waiting to be exploited for political gain.

Love/hate relationship? For the GOP the postal service is more hate/loathe, with a dose of gaslighting.

For years, Republicans have tried to pack the postal service off to a giant dead letter office while claiming they were only trying to help.

Following the long-standing GOP playbook on axing postal delivery, Trump has made clear his animosity.

A White House postal task force, headed by Treasury Secretary Steven Mnuchin, called for the privatization in June 2018. By December 2018, the task force pushed to kill worker collective bargaining, which would enable slashing wages and benefits. That fulfilled another part of the de facto Trump administration policy to make labor cheaper.

Read DCReport’s Joe Maniscalco on how postal workers are bearing the brunt of Trump and the Radical Republican efforts to dismantle the post office.

In April 2020, Trump called the postal service a “joke because they’re handing out packages for Amazon and other Internet companies.” The postal service says it negotiates prices that turn a profit on those deliveries—indeed, it must by law earn a profit.

FedEx, UPS and many smaller delivery services also have contracts with the postal service to deliver some packages, all under confidential negotiated rates.

Probably feeling the heat, Trump later tweeted, “I will never let our Post Office fail.” Then he blamed mismanagement and threatened to block a necessary loan to the postal service if it didn’t jack up prices it charges Amazon.

The volume of mail has been dropping for years. Last year, the postal service moved 54.9 billion pieces of first-class mail, down 30% from 77.6 billion pieces moved in 2010. Revenue, adjusted for inflation, has fallen only 10%, however.

A Strike a Half-Century Ago

In 1970 a local walkout by postal workers turned into a massive strike over poor wages and benefits. The postal employees hit the picket lines even though federal law didn’t allow strikes. The effectiveness of that strike sent politicians scurrying. Congress turned the Post Office Department into the U.S. Postal Service.

The change allowed unions and collective bargaining. The new organization was supposed to be self supporting, acting like a company. But the postal service remained as it is today: run at the whim of politicians.

There was the continued mandate of uniform service pricing and availability, no matter where citizens lived. The founding fathers saw it as a service to unite our country. Our Constitution does not require a postal service, however, it authorizes one. This is a point conservative Republicans have long seized on to justify ending mail service as we have known it since 1792.

Everyone was to have access at a single price, no matter how much it cost or where they were. No business would operate under such universal service conditions.

Instead, a smart private firm would limit delivery to densely populated areas and if required to provide service in remote areas charge premiums and offer infrequent, not daily, delivery.

Congress also left the organization hamstrung by limiting it to letter and package delivery; no digital mail, no banking.

In other words, the postal service faces expectations it should operate like a modern corporation without authority to do so.

“They began saddling the USPS with debt and financial disadvantage,” Rubio noted in a series of email exchanges with DCReport.

One egregious example came when Congress burdened the postal service with increased government pension benefits for employees who were federal workers before 1971.

Why? Because pension costs grow with the number of years employees have worked. The federal government, in one stroke, offloaded massive expenses from the federal budget to the postal service.

Pensions included those of many war veterans. “The Bush administration backed Treasury and declared the USPS had to pay the full cost of veterans’ pensions, and that was written into law,” Rubio said.

“So, the 2003 Pension Reform Act transferred that responsibility from Treasury to USPS, meaning the USPS was on the hook for the whole pension of any veteran who worked for it,” Rubio said.

Essentially, the postal service had to pay the pension benefits gained by many employees at another employer without compensation for having to cover that expense. That helped other government budgets look better for years.

The real kicker, though, happened in 2006, when a GOP Congress passed a bill signed by George W. Bush requiring the postal service to completely pre-fund 75 years of future retiree health benefits over 10 years. That means the postal service has set aside money for the retirement benefits of postal workers who are not yet born and many more who are children.

The cost? About $110 billion for the pension pre-funding, said Rep. Peter DeFazio (D-Ore.) who opposed the plan.

From a business vantage, this is nothing short of insane. No rational corporation would pre-fund expenses so far in advance, nor would it have the need. Instead, a company would invest money and let the value grow over time to cover the obligation.

The requirement has become a massive weight strapped to the postal agency that explains most of the deficits it has been running.

An outrageous irony, as DeFazio notes on his congressional webpage, is that rather than going to the intended purpose, “Funds are instead being diverted [by Congress] to help pay down the national debt.” It’s another budget-shifting, face-saving measure.

The Call to Privatize

For years, conservatives have pointed to these artificially imposed financial burdens to blame the postal service for its financial woes. Their answer is privatization.

Chris Edwards of the Cato Institute lists multiple benefits the agency enjoys without mentioning the crushing financial burden. Edwards and those in his camp said private industry could be more innovative and reduce costs.

But then, with congressional and administration thumbs on the scales, even the most advanced corporation could find itself at a standstill.

Daniel Smith, a free-market economist who is an associate professor at Middle Tennessee University, said privatization done right could provide benefits. He favored an open auction so we would know in advance what the buyer is paying, what levels of service it promises and how it proposed to fulfill those obligations.

But there are big ifs there. How many times in American history have private businesses received federal contracts and then failed to deliver on-time and on-budget? Look at the defense industry, for example.

“Part of the problem is that legislators have manipulated and prevented the Post Office from being as flexible as it could,” Smith said. “It’s politically controlled and prevents them from operating as a business should. The Post Office has done a good job of operating within the constraints.”

The bigger question is whether any private company could come close to doing what the postal service does and provide lower rates and better service.

Corporations that might take over include FedEx and UPS. However, most people don’t realize that even put together the amount of business the companies handle is small by comparison with the postal service.

In its 2019 fiscal year, FedEx handled about 5.5 billion express and ground deliveries. For UPS, the total was the same. The postal service, in contrast, handled almost 142.6 billion pieces.

Put together, FedEx and UPS lack the experience of managing anywhere near the volume of traffic. They don’t know the complex logistics of universal service to rural farms in western Nebraska, little businesses tucked away in Kentucky hollows and homes on stilts in Mississippi delta swamps. Both FedEx and UPS depend on USPS to complete many of their deliveries to such areas or they refuse the business.

In 2014, the most recent estimate available, the postal service was carrying 30% of FedEx’s ground deliveries.

How about ever hungry and expanding Amazon, which has been building its own delivery capabilities? Clearly it has not expanded enough to handle all its own work. Investment bank Cowen estimates that, although the percentage is dropping, by 2023 the postal service will still deliver 45% of Amazon’s total shipments in the United States.

Then there is price. USPS tends to be significantly cheaper than UPS or FedEx.

The cheapest UPS cheapest package rate is more than $8 and can run more than $40 for those remote areas UPS does serve.

The UPS letter rate starts at nearly $20. A USPS first-class letter is 55 cents, a uniform price whether the letter goes to Georgia or Guam.

A study from the Institute for Policy Studies, a progressive research and advocacy organization, notes rural areas representing 21% of the U.S. population depend heavily on the USPS, both for deliveries and jobs.

Congress could clear this up quickly.

There have been bipartisan efforts to unstrap the unnecessary economic weights from the organization and to provide pandemic aid.

Trump, Mnuchin and Senate Majority Leader Mitch McConnell (R-Ky.) have all taken steps to block any such changes.

Trump could clear up his objections, as he appointed a majority of the Postal Regulatory Commission. The commissioners must sign off on deals like the delivery rates that Amazon pays. He also appointed the entire USPS Board of Governors.

“It’s apparent that there are some folks for whatever their reasons are opposed to the postal service,” Pete Coradi, national business agent for the American Postal Workers Union, told DCReport.

There are two potential rationales for the ongoing attempts to break the agency.

One is that privatization would transfer enormous amounts of value. There are untold billions in real estate, trucks, contracts and intellectual property. There is high marketing value, if harnessed, to tell which people and companies sent letters or packages to any individual.

The other rationale would be to attack what is the third-largest employer in the nation, with more than 600,000 mostly unionized workers, historically allies of Democrats.

Although not considered federal employees, postal workers are eligible for federal health and retirement benefits. Push them into the private sector and suddenly there’s less of a burden on federal taxpayers, but not Americans.

Privatize the postal service and hundreds of thousands of workers would be affected, potentially seeing worse benefits and pay. That’s particularly bad for the African American community, which has historically been heavily represented in the institution.

And by overloading the agency and then sinking it further, denying the pandemic help freely handed out to large corporations, the GOP might get its way.