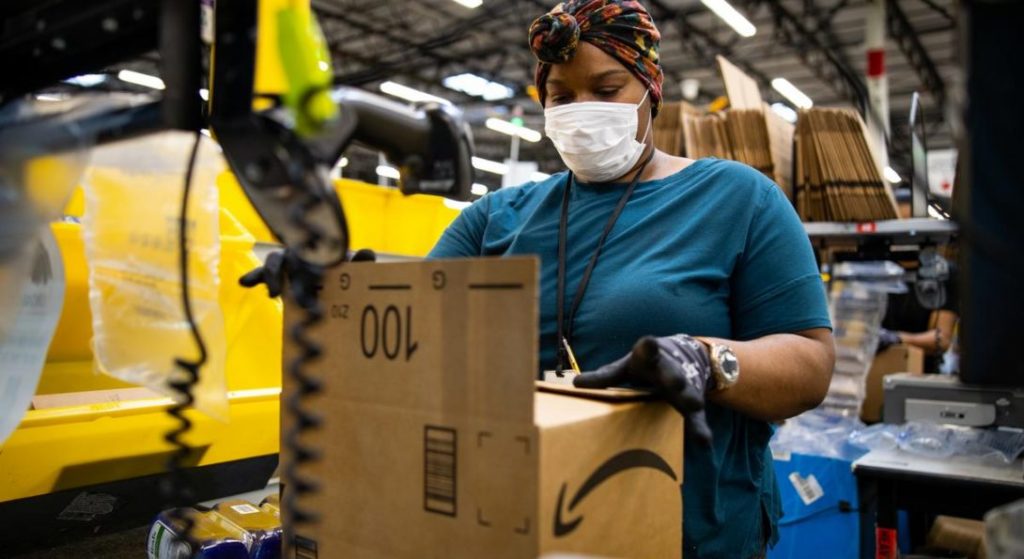 “It seems like the warehouses where we have high populations of minorities, there is a really big issue,” said Jessica Sanchez, a former Amazon worker in Denver. “Minorities have been fired for speaking out about their health and safety.”

Concern for and solidarity with Amazon warehouse workers is not limited to their families. In October, a coalition of Black-led organizations, including several labor unions and Black Lives Matter Brooklyn, marched to defund the police. The protesters made sure to stop outside Bezos’ $80 million Manhattan penthouse apartment  to underscore how Amazon is “complicit in the wider oppression in our country.”

Amazon would rather fire workers than face up to its total failure to do what it should to keep us, our families and our communities safe.

While some Black office workers at Amazon say conditions are improving, the warehouses remain brutal, many workers and former workers say. They cite harsh demands for how many packages are moved, often in buildings without air conditioning, or what workers consider adequate ventilation. Bezos, like some other high tech executives, has been trying to improve his image with Black workers and customers, including a late Spring memo in which he canceled meetings, but not work, on Juneteenth. The memo largely benefitted office workers rather than warehouse workers.

Lead organizer Robert Cuffy said, “Police brutality is replicated by the way Amazon treats its workers. I think Amazon is continuing the practice that’s been the guiding principle for Black workers in business places where Black workers are the last hired and first fired. And should they actually start organizing on the job — they become targeted.”

Indeed, Chris Smalls, one of the main organizers of a March 30 lunch-hour walkout at Amazon’s Staten Island warehouse and shipping center, was terminated less than five hours after helping to orchestrate the successful job action.

“Amazon would rather fire workers than face up to its total failure to do what it should to keep us, our families and our communities safe,” Smalls said.

According to the U.S. Bureau of Labor Statistics, Black people constitute just 13% of the U.S. workforce. But they are 26.5% of Amazon’s American employees.

Mario Crippen worked at an Amazon warehouse in Romulus, Mich., before he left last April, saying he was afraid he might expose his family to the coronavirus. COVID-19 has now killed about 350,000 Americans.

According to Crippen, Amazon warehouse employees were intensely monitored throughout the workday. He said Amazon treats them like “animals in a cage.”

Amazon banned wearing any clothing item with “Black Lives Matter” written on it — even on face masks. “They don’t want people to come together,” Crippen said. “I should be able to wear that proudly.”

In addition to having their safety concerns being dismissed,  people of color working inside Amazon warehouses say they are being denied professional advancement.

“I’m just going to say it — if you’re not the right color, you’re not gonna make it to that level,” said another worker from Amazon’s Romulus warehouse who asked for anonymity.

Both Sanchez and Crippen are part of a non-profit group advocating rights of frontline workers called United For Respect (UFR).

Courtney Brown is a UFR member who works at an Amazon fulfillment center in West Deptford, N.J., along with her sister. The Navy veteran said Amazon exploits vulnerable people of color in dire economic straits.

Because of coronavirus and a shift from shopping at brick-and-mortar retailers, Amazon has added some 1,400 new employees each day since the pandemic began 10 months ago. For the warehouse, it can draw on a large pool of out-of-work Americans desperate for a paycheck even at low pay and with miserable working conditions.

“They know the level of desperation out there,” Brown said. “We see almost entire families working in there; parents and their kids, husbands and their wives, fathers and sons. They hire the whole ‘hood. I find that to be insane.”

With entire families dependent on Amazon for economic survival, few are inclined to speak out against poor safety conditions and other workplace justice issues. Hiring all the working-age members of a household creates a concentrated economic risk for them, a risk that favors management and discourages speaking up for fear the entire family will be pushed out.

As Brown said, “It puts you in a bit of a predicament.”

Amazon touts its “comprehensive benefits. ” It argues the roughly 20,000 employees who tested positive or are presumed to have tested positive for COVID-19 are actually 42% less than might have been expected if the infection rates among employees were the same as the general population.

The retail giant’s anti-worker reputation began long before COVID-19. Last year Stuart Appelbaum, president of the Retail, Wholesale and Department Store Union,  reminded a symposium on workers’ rights in Brussels, “Amazon has a well-documented history of mistreating and dehumanizing its workers around the world.”