The House Prosecutors May Lose the Vote, But They’ve Won the Case 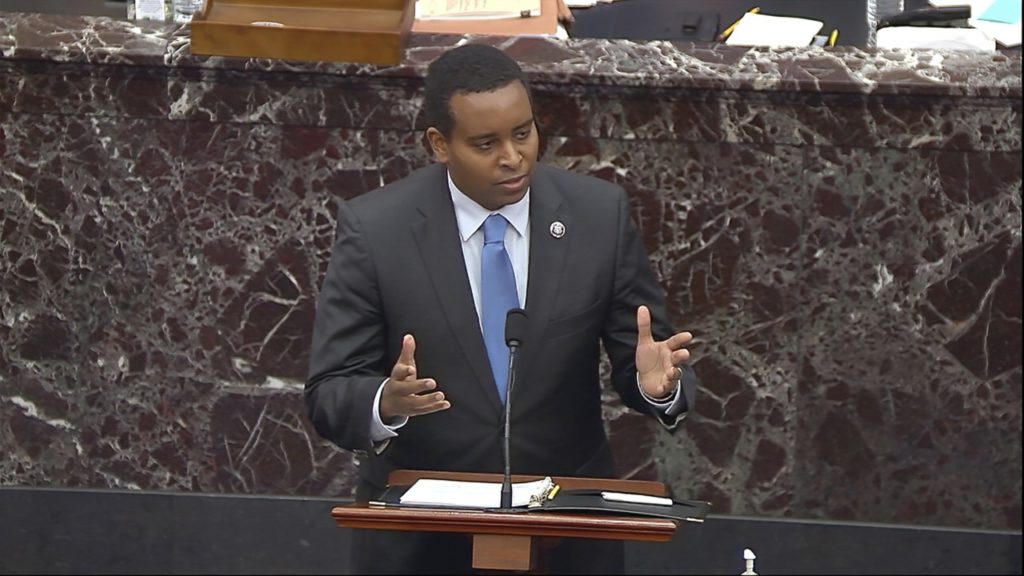 While There Probably Aren’t Enough Republican Senators with the Courage to Convict, the Story the Managers Told of Trump’s Treachery Will Live in History

Now it is all out there, an obvious and indelible stain for the nation and its 45th president—even if 17 Republican senators don’t want to vote to convict. As a friend noted, it may be rare but important that the probable losing side is writing the lasting historic record.

Let’s hope, whatever the outcome, that most Americans now recognize that Donald Trump was at the center of unleashing a broad attack on democracy and on his own government. He sat on his hands as people got killed and injured—all for his own glory. And he would do it again, as prosecutors told us.

The ugly messages of Trump’s tweets, actions taken to provoke and actions not taken to halt the fatal attack on the Capitol will outlive this trial.

As Trump’s weak impeachment defense starts re-airing arguments about process, free speech and, incongruously, about Black Lives Matter protests, there will be no answer for the detailed calls, campaign and incitement laid out by House prosecutors. The ugly messages of Trump’s tweets, actions taken to provoke and actions not taken to halt the fatal attack on the Capitol will outlive this trial.

Though it may not matter to pro-Trump senators, the prosecutors successfully persuaded that while they were anti-Trump, they weren’t Democratic partisans; the victims in the riot included Republicans as well, particularly Vice President Mike Pence.

Still, as has now become custom, it is troubling that we all don’t see the same horrible fact pattern, beyond the single last speech on Jan. 6, regardless of what to do about it.

Of all things, this impeachment was not a waste of time. It was an attempt to make sense of Trump’s triumphant egotism and abuse of the Oval Office for personal gain—something that may still attract attention from actual criminal prosecutions once this political trial ends.

Even as the trial unfolded, the House was readying legislation for coronavirus aid, another 1.5 million vaccines were delivered on each of the three days, three Cabinet nominees advanced toward approval and Joe Biden was talking to Xi Jinping of China about bilateral relations.

By contrast, the impeachment arguments highlighted that governing under Trump halted after the November elections, with all efforts in increasing intensity directed toward overturning results and leading inexorably to the Jan. 6 insurrection attack.

Here’s an example of how out of wack this all was. Republican Sen. Tommy Tuberville (R-Ala.) did not even seem to see the significance of telling reporters that when he got a misplaced phone call from Trump amid the rioting, he had told Trump that he couldn’t talk. The reason?  Vice President Mike Pence was being hustled away at for his family’s safety from Trump’s mob. Ten minutes later, Trump tweeted trash about Pence not living up to his expectations. That single act confirmed personal obsession not national interest, protecting people or the Constitution.

This, like so many other moments, illustrated that the situation was yet more dangerous than we had understood and deeply tied to the Trump obsession with overturning American elections as we know them.

The prosecutors called all this incitement; it is a stand-in word for doing Trump, who had claimed the Law & Order mantle, to do everything for himself to win re-election by legal or illegal hook, crook or revolution over doing nothing for the rest of us, including the scores of police officers injured or killed.

There was yet more video and argument to sew up the last of the prosecution arguments. In truth, their full day Wednesday had made the case, emotionally touching most in the chamber, but likely not changing enough votes for conviction.

They attempted not only to align timelines of the Stop the Steal effort with the actual riot, but to intimidation attempts in the states, coordination with racist militia groups and supremacists and to the failure to intervene once the riot had run amok.

In general, they sought a broad view of “incitement” to include the special responsibilities of a president to defend and uphold the Constitution.

In the same fashion that had proved effective in two previous days, they used video and clips to show:

The presentations struck repeatedly at the theme that the attack was foreseeable as a result of Trump’s statements and actions, sometimes marrying more general statements with the outcome of this particular outbreak of violence.

The managers tried to hang that central question posed by a Black police officer pelted with racist taunts and actual physical weapons: “Is this America?”

Prosecutors made clear that voting i for a Trump who called anyone who opposed him an “enemy of the people” was endorsing an authoritarian view floated first by Josef Stalin. They noted that domestic terrorism is rising, the spread of inflammatory information is growing and political divisions are more subject to a single inciting match. Prosecutors basically argued that conviction was important not only for Trump’s accountability but as a warning against future attacks on democracy and our capitals.

However this stilted Senate impeachment trial ends, we will have a cohesive record of treachery to the American political experiment led by Trump, who put himself before his oath. The Wall Street Journal says the prosecution case makes clear Trump will never live this incitement down, regardless of the vote. The Washington Post says the conviction is necessary. It’s hardly the stuff of “insult and absurdity,” the line that Sen. Lindsey Graham took.

Having the history recorded properly by itself may make America a little greater.