The Supreme Court Is Looking into ‘Partisan Gerrymandering’ of Legislative Districts 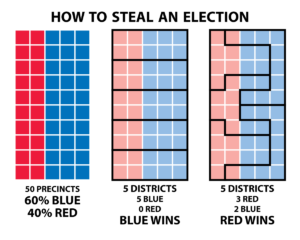 This diagram shows how partisan gerrymandering works. In this case, red voters make up 40% of the electorate, but district lines are drawn in such a way that red wins 60% of the districts.

Drawing the lines. The Supreme Court is considering two cases about gerrymandering that could change the way legislative lines are drawn. Political scientists are using voting data to calculate the “efficiency gap” of legislative districting—how much bias against a political party is drawn into an election map. Republican-dominated state legislatures have gerrymandered districts in North Carolina, Florida, Texas, Ohio, Pennsylvania, Michigan and Virginia to skew Republican, according to one analysis. The new cases are Gill v. Whitford, which challenges Wisconsin districting, and Harris v. Cooper, a North Carolina case. Gerrymandering is the practice of drawing political districts to favor one party or group over another. The word, coined in an 1812 political cartoon from the name of a Massachusetts governor, comes from the wild shapes of districts that result.

Afterthought. Trump tweeted 21 times before lukewarmly condemning the Portland murders of two men Friday who were trying to stop a white supremacist from harassing Muslim women. Portland Mayor Ted Wheeler is urging the federal government to revoke a permit for a “Trump free speech rally” on Sunday and to refuse a permit for an anti-Muslim march planned for Portland next week.

Missile tests. The U.S. will try to shoot down an intercontinental-range missile this week. The test comes as North Korea is working to develop a nuclear missile capable of reaching our country. U.S. efforts to shoot down missiles have failed in 9 of 17 tests.