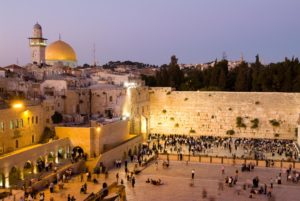 Israel. The U.N. General Assembly voted overwhelmingly to denounce Trump’s recognition of Jerusalem as Israel’s capital, largely ignoring Trump’s threats to cut off aid to any country that went against him. The nonbinding resolution declaring U.S. action on Jerusalem “null and void” was approved 128-9, a victory for Palestinians but not as big as they predicted.

The United States and Israel waged an intensive lobbying campaign against the measure, with U.S. Ambassador Nikki Haley sending letters to over 180 countries warning that Washington would be taking names of those who voted against the U.S. “As you consider your vote, I want you to know that the President and the US take this vote personally,” Haley wrote in a letter to her fellow members. “The President will be watching this vote carefully and has requested I report back on those countries who voted against us.”

None of the countries that voted with the United States and Israel against the resolution are diplomatic powerhouses—Guatemala, Honduras, Togo and the Pacific island states of Micronesia, the Marshall Islands, Nauru and Palau. Among those voting in favor were Russia, China and several U.S. allies, notably Britain, France, Germany, Italy, Greece, Japan and Turkey. The abstaining nations included Canada, Mexico, Australia, Colombia, Haiti, Poland and the Philippines.

Open for business. Congress passed a stopgap spending bill Thursday, averting a partial government shutdown at midnight Friday but pushing into January showdowns on spending, immigration, health care and national security. The stopgap extends federal funding through Jan. 19 and provides temporary extensions of the Children’s Health Insurance Program, which has languished politically since it expired in October, a veterans health-care program and a warrantless surveillance program set to expire Jan. 1.

Tax manipulation. AT&T’s pledge to give $1,000 bonuses to more than 200,000 employees once Trump signs the tax overhaul may save the company $28 million. That’s because committing to making the payment now could let it record the expense in 2017 for tax purposes which would mean a $70 million deduction for AT&T under the existing 35% tax rate. Recording the bonuses in 2018, when the new 21% corporate rate is in effect, would mean a $42 million deduction. Other businesses may also be looking at the changes in the tax code when looking at bonuses or charitable contributions ahead of the tax-law changes.

Blocked. A federal court in California blocked a rule issued by the Trump administration that expanded the rights of employers to cite religious or moral objections to deny contraceptive insurance coverage. The U.S. District Court in Northern California issued a preliminary injunction blocking the interim rules and the rollback of the contraceptive mandate in a case brought by California, Virginia, Delaware, Maryland and New York. The Justice Department says it disagrees with the ruling and is evaluating its next steps.

Still in Kansas. Kansans won’t be getting rid of Gov. Sam Brownback yet. Trump nominated Brownback in July to be the ambassador-at-large for international freedom, but the Senate has yet to confirm him. Senate Majority Leader Mitch McConnell (R-Ky.) says he doesn’t know when Brownback’s nomination will be voted on. Brownback’s nomination may need to be submitted again next year. Obamacare. About 8.8 million people signed up for health insurance through the Affordable Care Act on the federal marketplace, just slightly less than the total in the last enrollment period which was twice as long and heavily advertised. The numbers essentially defied Trump’s assertion that “Obamacare is imploding.” The number of people who signed up this year was 96% of the 9.2 million who selected health plans or were automatically re-enrolled through the federal marketplace in the last sign-up season.