US Government Open for Business … for a Couple of Weeks 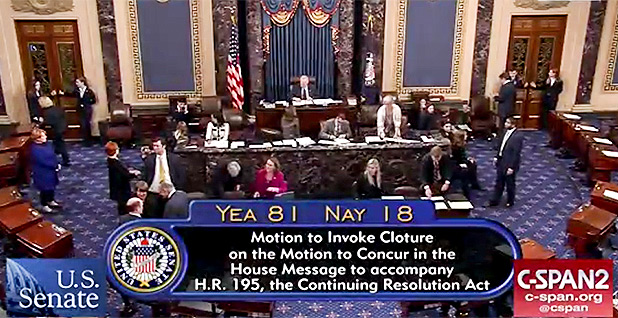 But How Will Anything Be Different on Feb. 8?

So, now it has come about: Democrats bowed, if not caved, on the shutdown issue, but essentially threw down the “promise” gauntlet to Republicans.

Whether Republicans do something more than gloat about a “win” is a question. For openers, no one won, everyone lost. But more importantly, the Senate and House Republican leaders and Trump now must actually do something besides throwing blame grenades. At issue are those concerns about stopping the deportation of immigrants under the Deferred Actions for Childhood Arrivals Act and about committing to actual bipartisanship on a host of other issues.

This is about trust, or the lack of any institutional trust between parties and between institutions. Just for the record, the Senate vote was 81-18 to end the shutdown, with the Senate’s most liberal senators refusing to take McConnell’s bait, underscoring the centrality of the trust issue.

I remain dubious that Senate Majority Leader Mitch McConnell’s statement of an “intention” to have the Senate consider a bill concerning DACA matches an actual promise. As Speaker Paul Ryan and his throng of conservative Freedom Caucus members are concerned, McConnell’s intentions do not commit the House to action. And within minutes after the Senate vote, six conservative senators were having lunch with the president.

If anything, the best case ahead is for things to now work backward: The Senate must craft a bipartisan bill that the president will have to back just to have a win, with the hope that the White House approval can persuade a House majority to pass as well.

Meanwhile, the White House managed to sit out the whole shutdown other than sending its spokesmen out to repeat blame for Democrats over and over, and to repeat the overhyped concerns that military pay would be interrupted. However urgent the need for planned military spending, a continuing resolution with a three- or four-week shelf life was not going to fill that purpose.

You do wonder what will be true on Feb. 8 that is different from today.

As always, the short shutdown had some lessons to learn:

For me, the most important was that the deal-maker president proved himself to be feckless and ineffective in a crisis. That Trump allows Chief of Staff John F. Kelly and adviser Stephen Miller to override his own positions presented to senators of both parties for outwardly partisan and ideological purposes is outrageous. The president left even his Republican leadership at sea about his true intentions.

This vacillation in policy in negotiation and insistence on serving his own personal base of voters shows why he is such a poor president. He has declared in his actions once again that he does not choose to be my president, and he is sending that message clearly to foreign leaders with whom he faces more complicated negotiation.

One lesson I am sure that no one has learned is to remember that we are talking about maintaining respect for one another as citizens, as problem-solvers, as people. The tenor of anti-Democrat, as well as anti-Republican talk, was shameful. The appeal of the Senate compromise pushed by a group of moderate Republicans and Democrats largely came about exactly because of a desire to show that kind of respect.

The president’s campaign folks turned out a quick, noxious television ad that called Democrats “complicit” in any killings by illegal immigrants in the country. Of course, both sides leaped on the shutdown to raise political money. It felt wrong. After all, nothing here is resolved.

As to the actual immigration issue, the White House and Republicans need to say forthrightly whether they will create a path to citizenship for the DACA folks, and perhaps to wider segments of the 11 million illegal immigrants in this country. To do so, they need to stop the pejorative use of the word “amnesty” and finally face a question of American xenophobia about the fact that America is a country of immigrants.

Even some Republicans find the price of linking immigration to a laundry list of border security issues, including 5,000 more border agents and a $20 billion wall, as too expensive. But one can predict that this will be the shape of any bill that hopes to gain passage in both houses.

It was billed as the end of a chapter, but it certainly doesn’t feel like it.