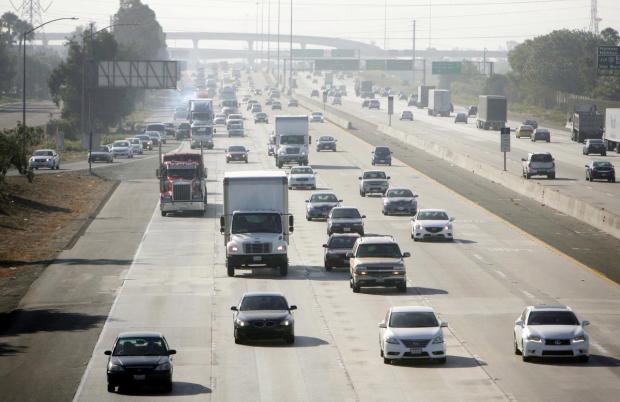 Traffic flows smoothly on the 60 Freeway in Ontario on Monday, June 22, 2015. Traffic created by the World Logistics Center is one of the central issues in evaluating the 40.6-million square foot project. An environmental study predicts that 33 freeway segments from Chino to Banning will drop to the worse level of congestion with the 60 and 91 through Riverside particularly hard hit.
Share
Facebook Twitter LinkedIn Pinterest Email WhatsApp

Climbing New York City’s subway stairs multiple times a day makes it almost easy to forget I lived for 17 years in Southern California, where everyone drove, even down the block, and where it was difficult to find an old car on the road.

Southern California, in particular, seemed to have a constant love affair with cars; it is a place where no one thinks twice about jumping in the car to drive hundreds of miles, a place where you don’t mind if the wind actually does blow through your hair (although in truth, I have little).

This comes to mind because about one of every five or six new cars is sold in California, a place that long ago got tired of polluted air and decided to do something about it through tougher emission standards for new cars and higher mileage requirements. Those improvements outpaced the federal standards for new vehicle sales, known as CAFE standards (Corporate Average Fuel Economy).

But what made them important was the auto manufacturers could not afford to ignore the more stringent California requirements if they wanted to sell cars. In fact, at least 12 other states decided to follow the California example.

Now comes word that the Trump administration, through Scott Pruitt as director of the Environmental Protection Agency, is preparing proposals to roll back those CAFE standards, weakening greenhouse gas emissions and fuel economy rules for cars. All this would be done in the name of saving American consumers the extra cost that auto manufacturers may undertake to meet those standards.

As The New York Times described the effort, it hands a victory to car manufacturers and gives them ammunition to potentially roll back industry standards worldwide. Among other things, the effort would overturn efforts by the Obama administration to enact those higher standards in connection with climate accord agreements, and it sets up yet another courtroom fight over whether federal or state requirements should prevail.

“That fight could end up creating one set of rules for cars sold in California and the 12 states that follow its lead, and weaker rules for the rest of the states, in effect splitting the nation into two markets,” reported The Times.

The 1970 Clean Air Act allowed California to set more stringent rules. And, of course, Pruitt, who disputes most environmental protection efforts, thinks this is a case for federalism. In many other respects, like civil rights or gun controls, for example, the Trump administration is aligned with state controls rather than federal.

If Trump truly cares about not raising prices for consumers, how does he possibly explain tariffs on steel and aluminum, which, the last time I checked, are pretty important to the construction of cars? Tariffs on imported steel will, um, raise the cost of cars and trucks to these same car-buying consumers.

The whole idea behind the CAFE standards is to gradually change the ability of cars to support higher mileage even while reducing emissions, thus also lowering our need for as much energy and oil-based fuel from the rest of the world and gradually not worsening air pollution. Remember energy independence as a way to make America great?

These are the same rules that brought us the catalytic converter and no lead gasoline. Perhaps Trump and Pruitt want to go back to an era in which neither was used? Why not?

But Pruitt—the same Pruitt who faces ethics questions over departmental spending on his housing—has said in interviews, including one with Bloomberg TV, that “California is not the arbiter of these issues.” Under the Obama administration, the federal government toughened pollution standards to match California’s. Pruitt said the state standards “shouldn’t and can’t dictate to the rest of the country what these levels are going to be.”

Now, I have a category of Trump actions that purport to be one thing and really are another. My standard, in California or elsewhere, is effective policymaking. You can be against the climate accords in principle because you don’t want other countries to tell America what it can do—which is Trump’s misinterpretation of the accords—but that has nothing to do with what American policy about polluting emissions should reflect. It has nothing to do with fuel efficiency either. And from a jobs point of view, these regulations are totally neutral.

This is the same car industry that the president has been touting for recent boosts in business, bringing factories back to the United States and restoring Detroit as the world’s car-making capital. Remember this is the same Trump who said he would have opposed any government help, as extended by the Obama administration, to the auto industry when they faced decimation in the 2008 crash.

As implemented in 2012, the rules for reducing emissions of carbon dioxide would have required automakers to nearly double the average fuel economy of new cars and trucks to 54.5 mpg by 2025. If fully implemented, the rules would have cut oil consumption by about 12 billion barrels and reduced carbon dioxide pollution by about six billion tons over the lifetime of all the cars affected by the regulations, according to EPA projections. The rules also would have put the United States, a laggard in fuel economy regulations, at the forefront worldwide in the manufacture of electric and highly fuel-efficient vehicles.

The United States and Canada are the only major nations that have adopted mandatory emissions standards through 2025. The European Union has only recently proposed standards for 2025 and 2030, while China has only started to work on standards for those years.

As the argument goes, less restrictive regulations in the United States could provide an opening for automakers to push for more lenient standards elsewhere as well, leading to the emission of more pollution by cars around the world. While sales of electric vehicles are starting to take off, they still represent barely 1% percent of global car sales.

The move just doesn’t make sense—consumer prices are going up anyway, we’re missing out on a chance for needed environmental protections and worsening things instead, we’re guaranteeing Big Oil’s need to feed these mileage-poor beasts.

Maybe a drive to the beach will clear my head.