In January 2017, upon confirmation as secretary of the Department of Transportation, Elaine Chao committed to separating herself from her family’s shipping interests. Looking back, it’s clear she didn’t.

During the Trump administration, itself awash with emoluments and ethics concerns, Chao’s ability to gain financially flew mostly under the radar. Government watchdogs failed to challenge Chao’s repeated wrongdoings.

The Chao family business is deeply entangled with Beijing. The family dry bulk ship company has borrowed 100s of millions of dollars from Chinese banks, all of which are partly or fully owned by the communist regime.

In 2019, Elaine Chao faced some criticism for public appearances with her family members that seemed to be elevating the profile of the family business long after she was sworn in as transportation secretary.

The report shows clearly that numerous documented Chao actions could be felonies under federal laws designed to avoid official favoritism.

Walter Shaub, the former head of the Office of Government Ethics, said Chao’s actions appeared to be a clear abuse of power. “This is the kind of thing you would use in a training class to teach government officials what a misuse of a position looks like,” Shaub said. “This conduct falls into the category of extreme rather than gray.”

What the public knew was minor, though, compared with the damning facts in a 38-page inspector general report that was hidden until the Trump administration ended. That report revealed that in December 2020 the inspector general referred its findings about Chao’s conduct to the Justice Department for criminal prosecution.

Attorney General William P. Barr, whose policy was to personally review all cases involving high-level Trump appointees, declined to prosecute Chao. A spokesman for Chao said that the Justice Department’s decision not to prosecute “closes the book” on the issues and exonerates Chao.

The inspector general made extensive findings that have astonished ethics officials in Washington, D.C., some of whom say they’ve never seen anything like it. The report shows clearly that numerous documented Chao actions could be felonies under federal laws designed to avoid official favoritism.

Significantly, during the four years Chao served our country, her family’s shipping business did exceptionally well. 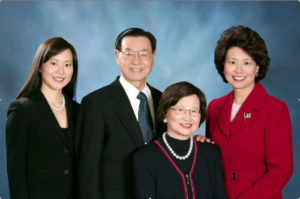 James Chao, a ship captain in his 20s, made his way to New York. In 1964 he started acquiring dry bulk ships, when he landed his first big contract with the U.S. government, shipping rice to Southeast Asia during the Vietnam War. Often referred to as “Dr. Chao,” he received an honorary degree from the Massachusetts Maritime Academy in 2018.

The family’s shipping firm, Foremost Group, operates mainly among the United States, Brazil and Canada and China. More than 70% of its freight goes to China. The company has done so well that it donated $40 million for a building at the Harvard Business School named for Elaine Chao’s mother, a graduate of that school.

The family business grew substantially over the four years that Elaine Chao was in the Trump cabinet:

Growth was almost half a million dollars a day.

When Chao assumed office in January 2017, the Foremost fleet was valued at half a billion dollars,

Its value more than doubled:

$1.18 billion was the fleet value by the time Chao left office, according to VesselsValue, a private vessel valuation service which shared its analysis with DCReport.

According to VesselsValue, the Chao family fleet in January 2017 consisted of 22 vessels. After selling off some older ships and ordering new vessels, the family fleet will reach 32 vessels this summer. Chao and McConnell in 2014 visit the Harvard Club in New York, where Foremost celebrated its 50th anniversary and signed a contract with a Japanese shipbuilder. (GNews)

Most of the wealth Chao and McConnell have disclosed in their annual government ethics filings comes from her inheritance when her mother died in 2007. She received as much as $25 million from her mother, these forms indicate.

Elaine Chao has no stake in the family business, a point emphasized by her staff in interviews with the inspector general. That is true but misleading.

She still had a lucrative reason to use her government position to tout her father’s shipping company. It encouraged shippers to choose Foremost rather than competitors because of her ties to Trump, and it helped the company expand because it was more attractive to mainland China and Taiwan bankers. So long as she remains in the good graces of her father, it is likely she stands to inherit a second time along with her five sisters, a contingent interest that could be worth many 10s of millions of dollars.

With that background, here are some telling examples of Elaine Chao using Transportation as a promotional arm to build the profile and reputation of her family’s Sino-American shipping empire. The report focused on 14 events the secretary attended or planned to attend with her father between 2017-2018, including the 50th anniversary of the Department Transportation, among other instances of mixing family matters with her official duties. Here are some:

1. Chao planned a China trip in which she would be accompanied by her father James and sister Angela Chao, CEO of Foremost Group.

Draft itineraries included book signings and appearances for her father and her family joining her in official events and high-level meetings.

State Department personnel at the American embassy in Beijing were alarmed at this plan, which was a breach of well-developed protocols about mixing official duties and family business.

The trip ultimately was canceled because of diplomatic staff concerns.

While planning that trip, a transportation department official emailed the secretary about whether her father wanted to meet with a former classmate, thought to be former Chinese President Jiang Zemin. Arranging such a meeting would not be appropriate conduct for a government agency.

2. Various department staffers were told to provide media and public affairs support to the secretary’s father, even maintaining lists of his awards and creating a media strategy and public relations plan for him and Foremost Group.

Elaine Chao had her staff, on taxpayer time, edit a chapter from a book on her father, and she directed department public affairs staffers to edit her father’s Wikipedia page. The department’s public affairs director devised and recommended a strategy “amplifying the coverage in regional [Chinese] press, a means to build Chao’s profile and to share the story of his journey.”

3. Repeatedly transportation public affairs staffers arranged media coverage and coordinated photo opportunities for Elaine Chao and her father. They arranged targeted in-depth interviews with the secretary and her father intended solely for the Chinese market.

In one event where Elaine Chao was asked to speak, the former secretary first asked if they would be distributing 500 copies of her father’s biography, Fearless Against the Wind.

When Elaine Chao was invited to be the keynote speaker at a maritime event, she asked the sponsors to give her father an award, evidently as a condition of participating. Once the secretary got confirmation of an award for her father, she agreed to attend.

Arrangements for that event included placing a copy of her father’s book on the chair of each gala attendee.

4. Elaine Chao asked staff to act as personal assistants for her and her family, especially her father.

They were instructed to organize repairs of James Chao’s personal belongings, schedule personal appointments, FedEx Christmas ornaments to him – and send the secretary and her husband McConnell a list of those ornaments – and to get autographed photos for Transportation Department files.

The inspector general’s investigators interviewed transportation ethics lawyers, who revealed that “they had no record of a request to provide ethics advice” for a number of the specific events listed above. More often than not, Chao’s top staff failed to bring potential conflicts to the attention of the ethics lawyers, as required by longstanding policy.

When ethics lawyers were consulted they emphasized how the secretary should minimize her connections to the Foremost Group and its transportation interests. The ethics lawyers outlined specific steps to ensure Elaine Chao’s  official government position was not conflated with Foremost in a way that gave advantage to the reputation and prestige of the family business.

Nevertheless, Chao cultivated her and her family’s image in China. The New York Times reported that the secretary’s official calendar showed at least 21 interviews or meetings with Chinese-language news organizations in her first year as transportation secretary.

Before Chao’s confirmation, conflict-of-interest issues were raised. Her spokeswoman said no conflict existed because Elaine Chao had no “ownership stake” in Foremost. That statement ignored her contingent interest provided she remains in the good graces of her father in a business with ships valued at more than a billion dollars, a business that would prosper if shippers believed choosing Foremost Group ships would curry favor with the Trump administration.

The Chao investigation started in June 2019 under the direction of acting Inspector General Mitchell Behm. In May 2020, after many on Chao’s staff had been interrogated and the direction of the investigation had become clear inside Transportation, Donald Trump tried to remove Behm using the limited power presidents have to fire IGs.

The Inspector-General Act requires that an inspector general be appointed “without regard to political affiliation and solely on the basis of integrity and demonstrated ability.” The act was intended to, but in this case failed to, insulate inspectors general “from political retribution,” a common Trump administration theme.

Behm was one of five inspectors general Trump attempted to remove as their staffs were digging into corruption in his administration. Trump was unable to remove Behm but had to wait for the Senate to confirm Trump’s nominee to take over.

Trump’s nominee as the new inspector general at transportation was the head of its pipelines safety office. The nominee was to retain his pipeline job while also becoming inspector general, an unusual arrangement putting a subordinate in a post that is supposed to be independent.

McConnell to the Rescue

Still in his acting position, seven months after Trump had tried to remove him, Behm sent Chao’s file to Justice with a referral for a criminal investigation. It was sent on Dec. 16, 2020. After one justice office declined to open an investigation, the inspector general’s report was sent to a different part of Justice the next day.

The reaction was swift. That same day, Dec. 17, McConnell, Chao’s husband,  abruptly brought to the Senate floor a vote to confirm Trump’s nominee to be the new Transportation inspector general.

The first vote failed but ultimately on Dec. 21 the nominee was confirmed on a party-line vote of 48 to 47. That ended Behm’s acting role. Of the five inspectors general that Trump tried to fire, the only one removed was the one investigating McConnell’s wife. Behm has since returned to his previous position as deputy inspector general at transportation.

Whether the Biden administration will review that decision under Attorney General Merrick Garland is unknown.

Featured image: James S.C. Chao with daughter Elaine, then awaiting confirmation as secretary of transportation, were interviewed by China Daily, an English-language newspaper owned by the Chinese Communist Party, in Washington  D.C., in 2017. (Photo by Zhou Pai/China Daily)